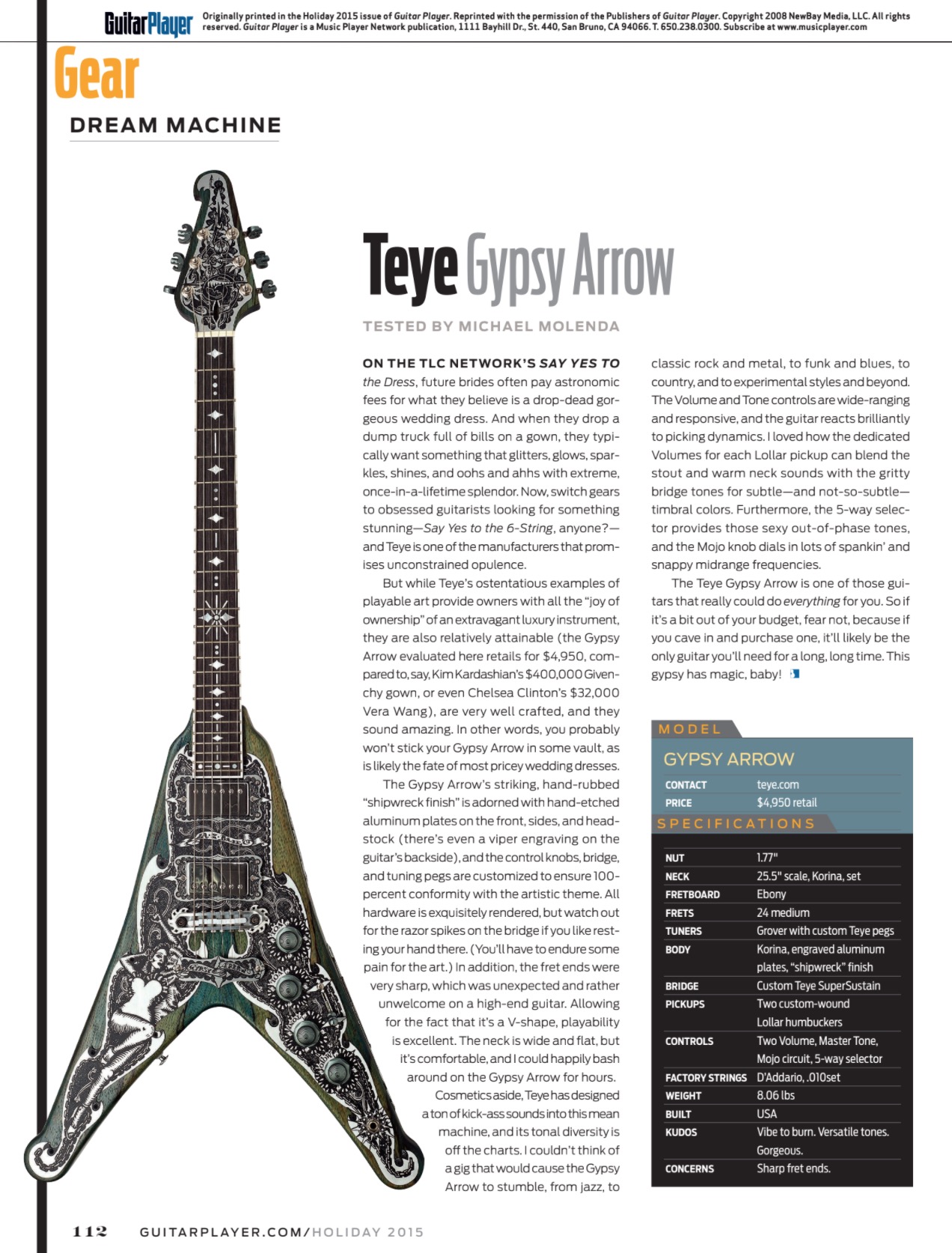 A COLLECTION OF QUOTES, MAGAZINE AND VIDEO REVIEWS OF TEYE GUITARS 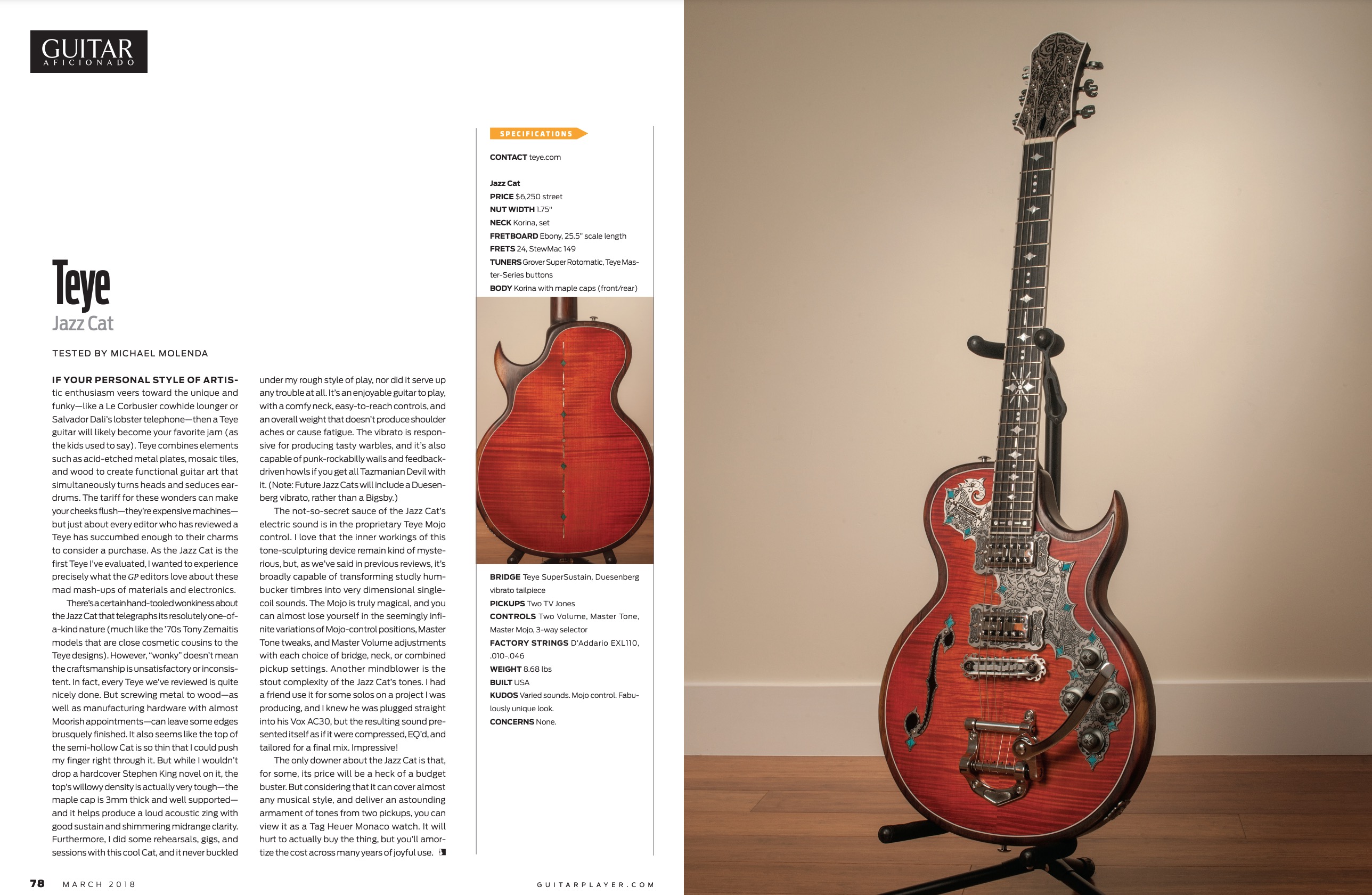 "Teyes are the best sounding electric guitars being made today. And just for the record, I have an R9 too. (Gibsons top reissue of the Les Paul) A really, really good Murphy one in fact. It kills my buddy’s 1968 Custom, which, up to now, was the best LP I’ve ever heard. Guess what, my Teye beats it hands down." (Calvary Kendrick)

"Dude, it’s not every day that someone A/B’s a new guitar with my sweetest ’57 Goldtop (the first ever Gibson Les Paul with humbucking pickups: a legendary guitar) and then it walks all over it." - (Mark Taylor, vintage guitar dealer, Nashville)

"This guitar is as close to what I’ve been trying to achieve as I’ve seen. - When I say it’s good, I mean it’s good. Otherwise I would have said nothing. Your guitar is as good as mine. - Sit down! I wanna talk shop with ya. Why did you do this, and this, and this? I would NEVER have thought of that." - (Les Paul) 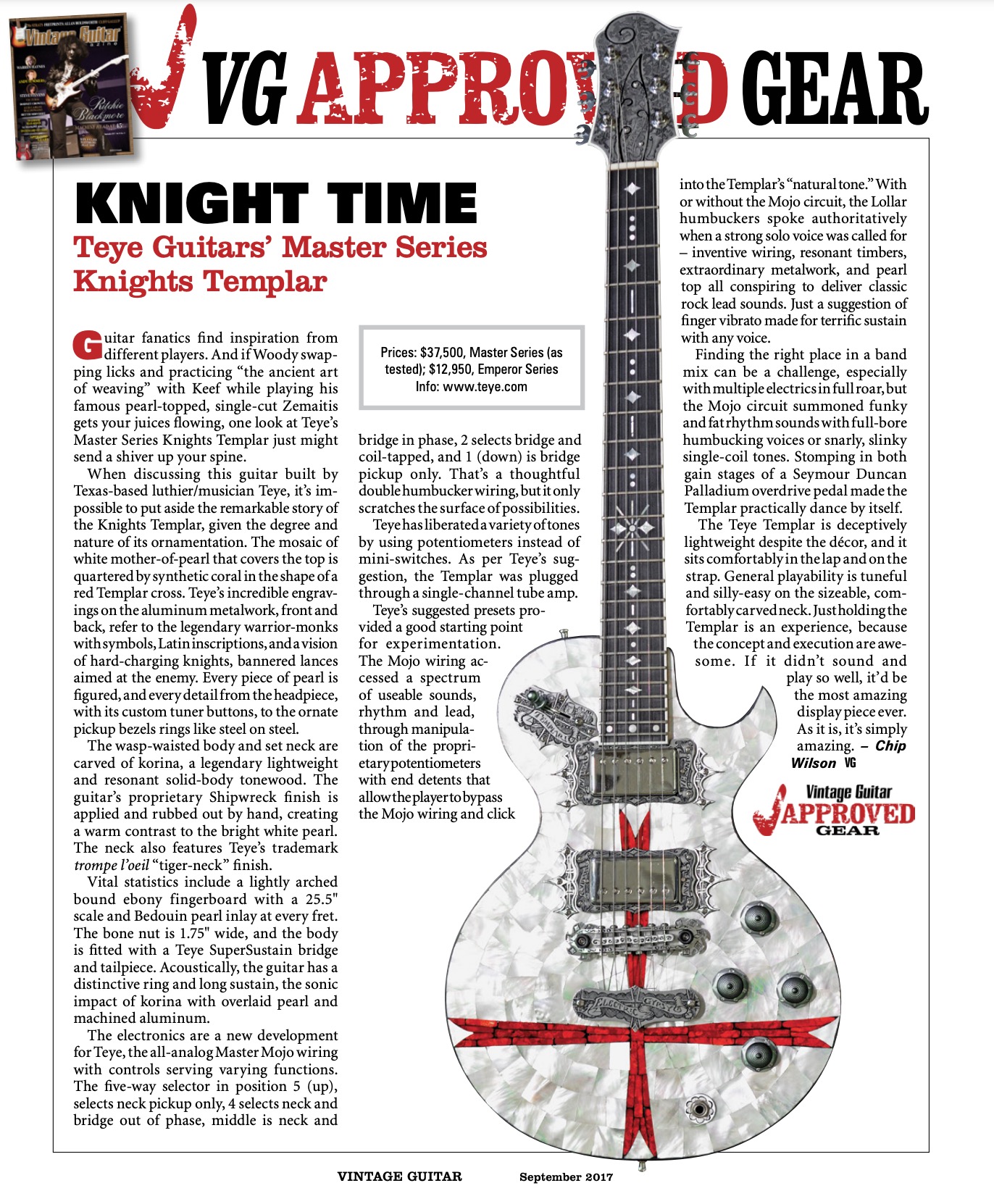 "Teye has raised the bar on custom guitars. His instruments not only are beautiful, but their sound and the way they play make them some of the best guitars I’ve ever played." - (Rich Robinson, Black Crowes; Bad Company; Magpie Salute)

"And all of the tonal variations were extremely inspired. Although I tried, I could not coax an unlikable sound from the (Teye La) Pirata." (article in Premier Guitar Magazine. Reviewers’ name unknown) 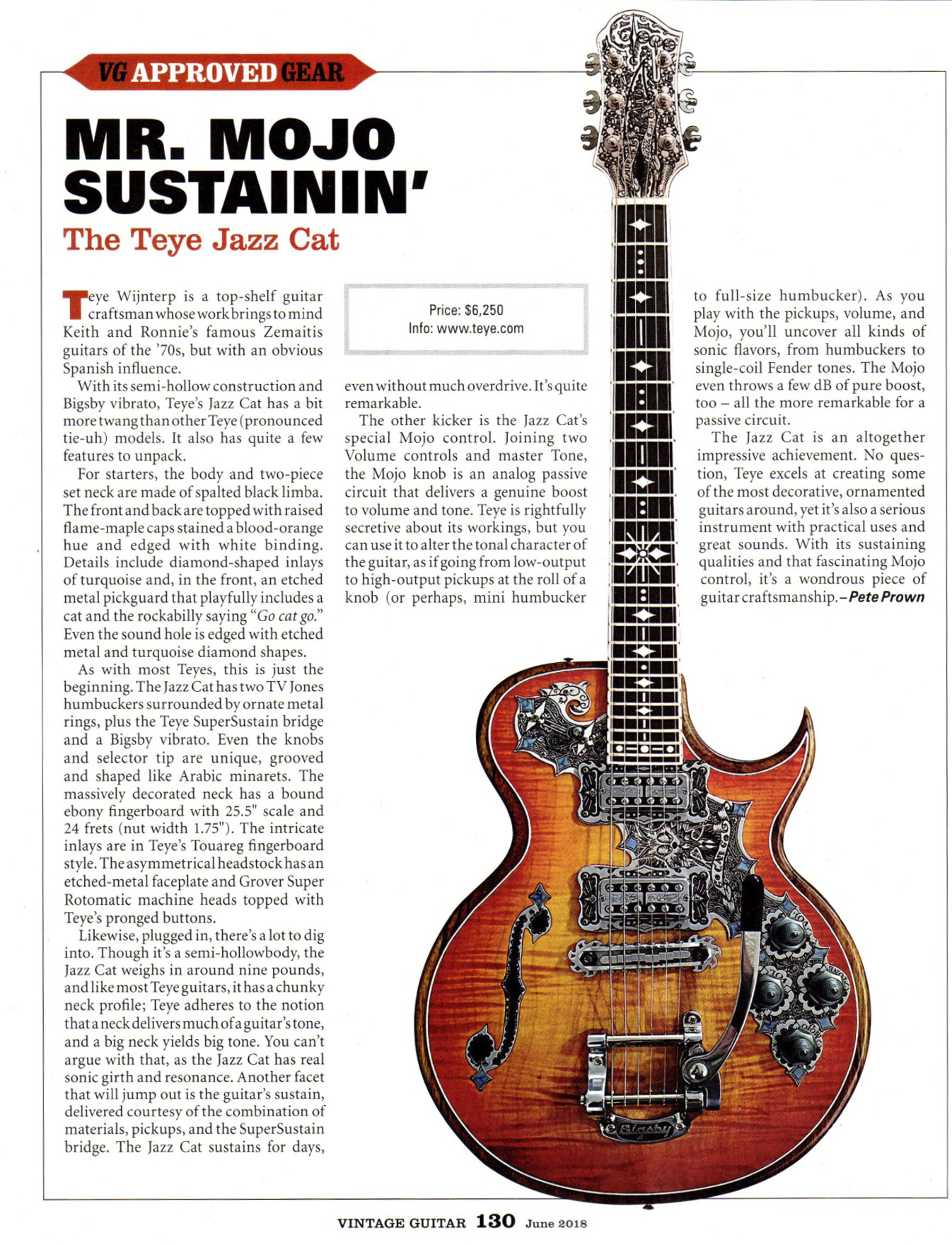 "The Teye Gypsy Arrow is one of those gui­tars that really could do everything for you. So if it’s a bit out of your budget, fear not, because if you cave in and purchase one, it’ll likely be the only guitar you’ll need for a long, long time. This gypsy has magic, baby!" - (Michael Molenda, Editor-in-chief, Guitar Player Magazine)

"Just holding the (TEYE) Templar is an experience, because the concept and execution are awesome. If it didn’t sound and play so well, it’d be the most amazing display piece ever. As it is, it’s simply amazing." – (Chip Wilson, Vintage Guitar Magazine)

EVERYTHING ON A TEYE,
IS BEAUTIFUL. 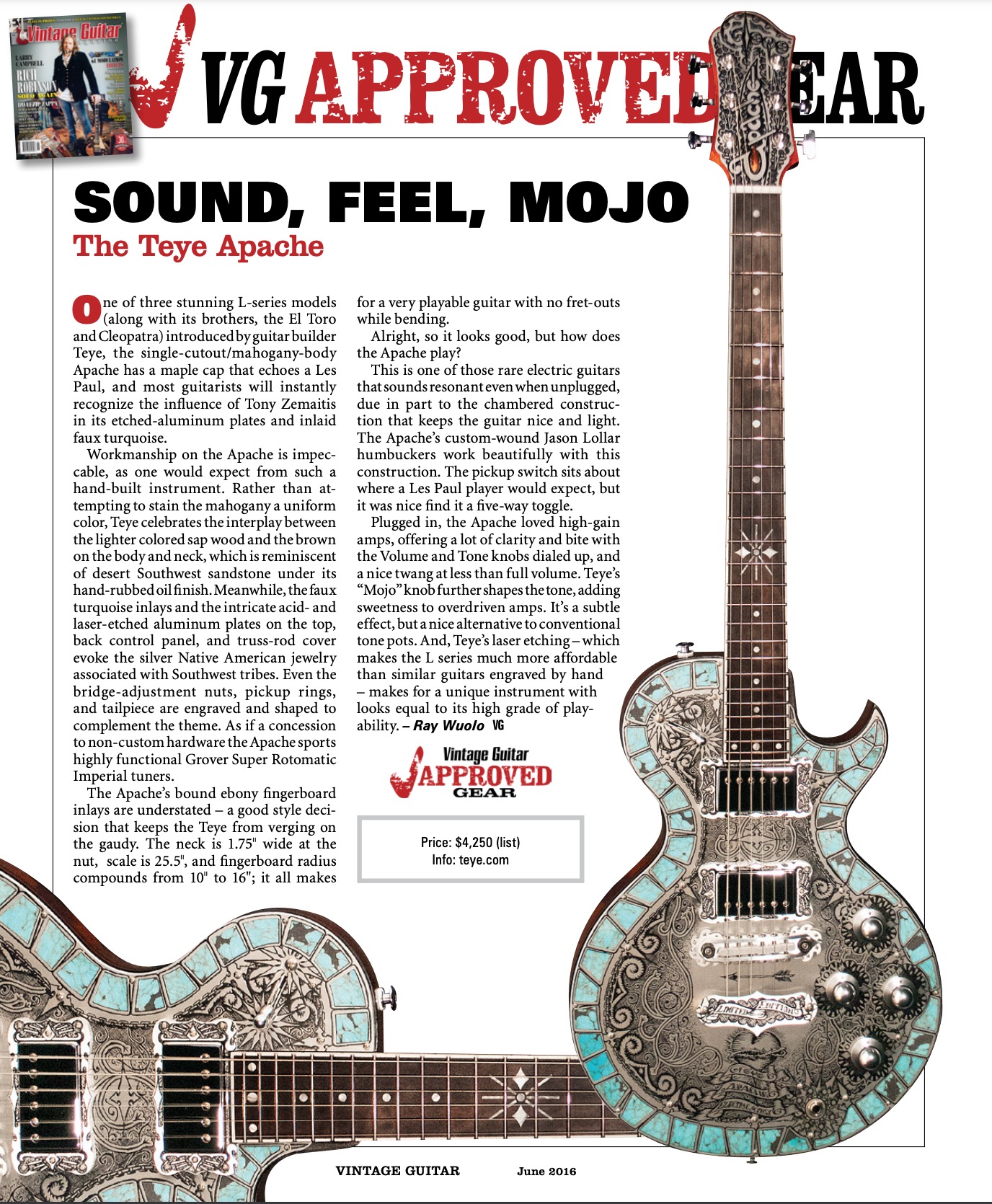 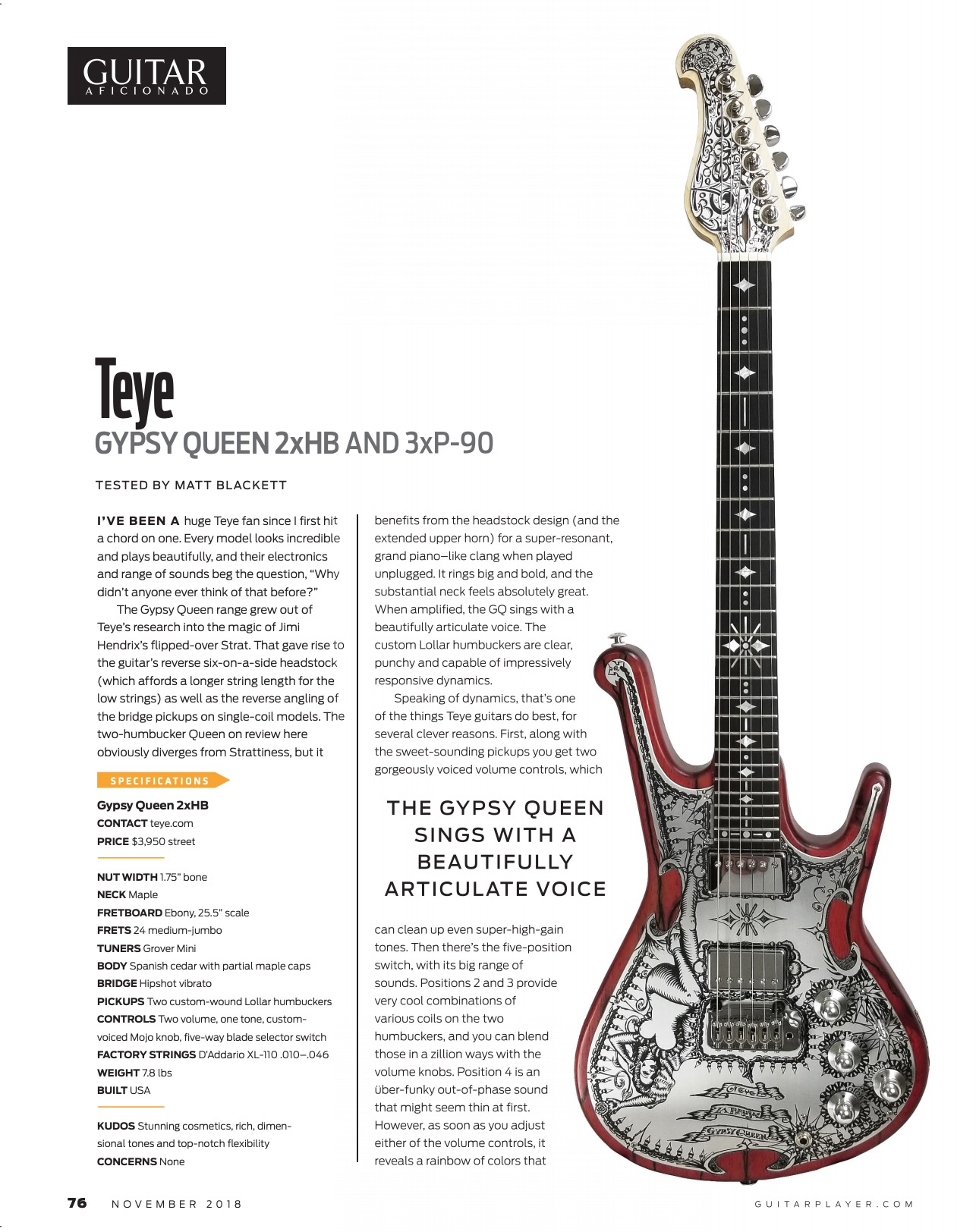 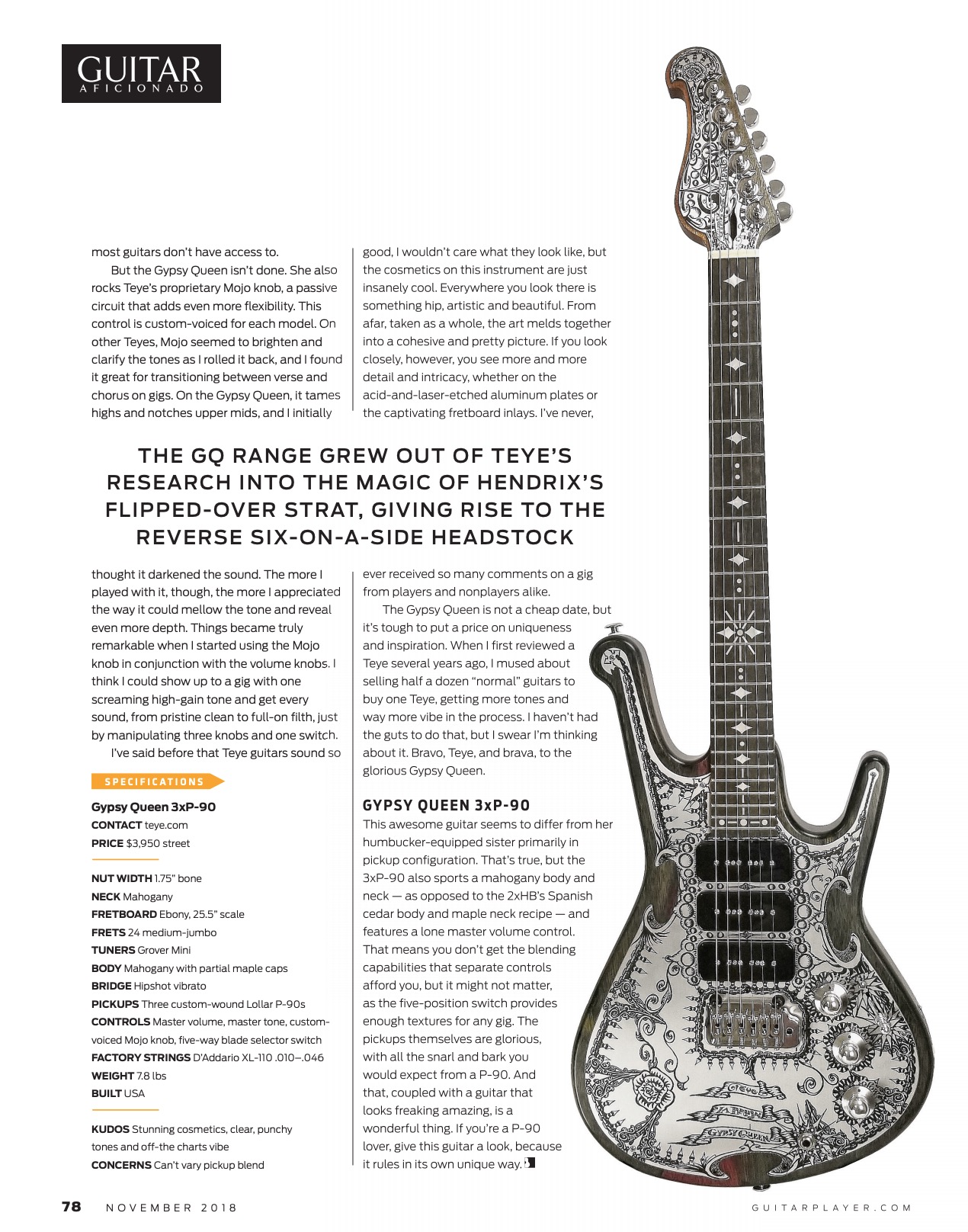 "Not everyone will want solidbody as distinctive as this plank, but it would be an obvious knockout stage guitar. Regardless, every detail on the 4xSC Gypsy Queen is expertly crafted and it's a joy to play, like a guitar fit for a queen... or a king." - (Pete Brown, Vintage Guitar Magazine)

The One And Only

Thank you! Your submission has been received!
Oops! Something went wrong while submitting the form.
Privacy

0
TEYE GUITARS
No items found.
Back to Shop
Product is not available in this quantity.